This section is about taking the photos itself. This describes in principle how I fill my memory card. There are many methods to do this, most likely many betters ones, than what I can describe.

However, everything that I describe here, I have tested myself. And I try to concentrate on those aspects pf macro photography, which I consider to be relevant.

It might happen that wind disturbs the stack, and you need to retry. Or the subject has moved after half of the stack is done, or leaves the scene.

Sometimes it is worthwhile to keep such stack and to use the captured part of it. In many cases it is better anyway, to leave a part of the subject out of focus.

But sometimes it does not help: deleting obsolete files makes space for new photos!

I have spend interesting hours in my garden without bringing home a single photo. That sounds frustrating, but there are a few tricks, which help to fool yourself.

If I really want to take some good macro photos, then I start with something easy. Starting with something that cannot move, like a mushroom or a nice looking flower means, I get into my "macro modus". I get settled with my camera settings, my tripod, and the light. And I can train my skills of composition. It fills my memory card, and even if I do not take any further photo, I have at least captured something.

The feeling to have taken already one photo helps to "calm down".

Afterwards I am in the right mood to just look around and search for more challenging subjects.

„I never have taken a stack I’ve intended. They’re always better or worse.“

There are macro photographers (see Allan Walls), who recommend the use of flash for focus stacking. They have good reasons for that, which I can agree with. Especially when taking photos in a studio, you can control the light nicely with flash.

When working with an automatic macro rail, the time between two photos can easily be controlled, so the flash can recover.

Still I am hardly using flash in macro photography currently, and I have good reasons for that, too.

On one hand I have bought some very good LED torches, which provide an excellent CRI (= Color Rendering Index) and therefore can be used nicely in combination with other light sources like normal daylight.

On the other many focus stacks require time anyway. So if the subject cannot move anyway, there is not really a difference, whether my exposure time is short or long. So in that case I work with normal daylight.

It is easy to judge (easier than flash). And if you avoid direct sunlight (which you should do anyway), the daylight is very smooth and indirect.

There is hardly any better light for macro in nature...

„Where the light is brightest, the shadows are deepest.“

Daylight is easy to use. And we do not need to spend to many words about, except about the fact that it might not be enough.

Many insects are quiet in the early morning or late evening, when the natural light is limited.

The large magnification "eats" even more light, and so I am happy that my camera can work with higher ISO.

Depending on the stacking method, the noise is increased or decreased in postprocessing. This will be covered later.

However, I normally allow myself to use ISO1000 without even checking. Even ISO 3200 can be used, if needed.

Normally I work with a tripod, and the whole stacking procedure takes 10 seconds or more. So the subjects is not allowed to move anyway. I am using the electronic shutter, and I try to use the aperture, which makes the camera to move nothing - except the autofocus. All in all the longer exposure time does not matter in that case.

The daylight has the advantage that it creates the least amount of disturbance. There are insects, which start to move, if an artificial light source hits them.

It makes sense though, to check the "limits":

First of all I have the limits of my macro lens. Let us take a typical 105mm lens, which starts at f2.8 and ends at f22. The thumb rule says, the best performance can be expected at 2 f-stops below wide open. That would be f5.6.

The diffraction starts maybe at f11, so the usable range is then between f5.6 and f11?

The Medical – Nikkor 200mm/5.6 with integrated flash allows a 3x magnification. With both adjustable rings the aperture is set.

In the picture on the left I have used not the full flash power, but only ¼ of the power. In combination with ISO200 and magnification of 3:1 the set aperture is f32.

With almost the same settings I took the photo of the ant below: the reduction of the exposure time to 1/160s (instead of the "usual“ 1/60s) and the aperture setting of f45 is compensated with the full power of the flash, which I used.

Due to these settings the background gets dark. The photo was taken during the bright day. The diffraction is already visible, the shallow depth field (despite the f45), too.

So the best is to try out, which combination of aperture and exposure time gives the best results for a certain subject.

However, playing with the aperture sometimes seem to reveal some inconsistencies. In most of the macro photography cases that is related to the "effective aperture".

With Nikon it is simple in principle, because it indicates the effecitve aperture already. At least, if lenses are used, which indicate the magnification to the camera body. That is the case, if focus bracketing works, i.e. if the autofocus info is exchanged. Sounds confusing, but it is not.

Let us check an example: I am working in mode "A" or "M", i.e. I set the aperture myself. Let me do that with my macro lens, and let me choose wide open f2.8.

Now, if I change the focus from infinity to 1:1, I can watcht the aperture changing automatically! 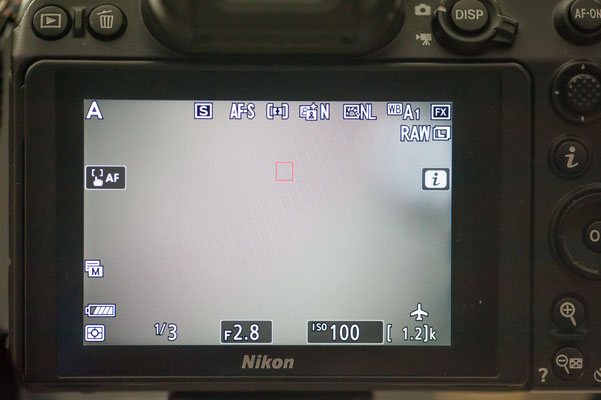 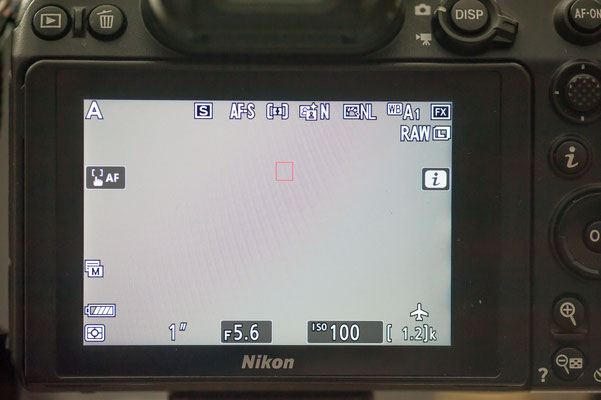 Why that? Does the lens manufacturer tell a lie with the f2.8?

The reason is - as mentioned above - the effective aperture, which is indicated by the camera.

And now we stop down by two f-stops to get the best performance and we end up at f11!

Even better it gets, if I increase the magnification further, e.g. with a close up lens. With the Raynox M-250 I get to almost 2x magnification so at the end my wide open corresponds to 3x 2.8 = f8. However, the camera shows f5.6, and originally I set the aperture to f2.8...

As said, this can be confusing, when dealing with it the first time. And I do not want to really go into the optical and technical details. Others could explain that better than I can do.

My point is just to say: take your camera + lens and try out the limits, (on either side) to check what works well on your side and what does not work at all.

What do I need to set? And what is indicated?

That is not the same with different cameras and different lenses. And the fact that the aperture changes, if the magnification changes, is not really obvious to many photographers.

On top of what we just saw, there are additional limits, given by the camera system. The DSLR always shows the wide open picture in the view finder. The mirrorless camera Z6 shows the stopped down picture between wide open and f5.6. This allows to directly control the effect of stopping down. The reduced brightness is automatically compensated.

As soon as I stop down further, the shown picture stays at f5.6 - most likely to still keep the autofocus working.

When using the electronic shutter, this can be heard. Until f5.6 the camera is totally silent, from f5.6 onwards the closing and opening of the aperture can be heard.

Unfortunately this happens with every single photo, even at focus bracketing. In fact that means for a focus stack of 100 photos, the aperture is closing and opening 100 times. That reduces the speed quite significantly.

I am not sure, whether this behavio is just a bad implementation or a "must", because of the autofocus. Anyhow, the focus bracketing of the Z6 is not one of its strength...

For me that means I try to keep the aperture at f5.6 or faster to avoid this annoying behavior. Using only the macro lens itself, that works well. But it means that at 1:1 I already use the lens wide open.

In combination with the cloe-up lens, stopping down to f8 or even better f11 leads to much better sharpness and contrast. So I have to live with the slow speed and the annoying sound.

Another aspect I do not want to skip: the composition.

We all know that the aperture has a major impact on the composition, on the way the sharp and non sharp areas of the photo look like. That is the same with focus stacking.

Even a focus stack looks different, if taken with f5.6 or with f11. And the design with sharp areas and the bokeh is a major part of photography, yes a major fun part of focus stacking.

Out of all these theoretical expanations and the collected experience, I can only recommend one thing: Try out!

And I mean that seriously. I take my camera, a lens combination with or without flash, with or without extension tubes, etc. And then I take a fitting subject and take several stack with different settings.

During summer I love to take photos of flowers, who are extremely patient! Even after the 10th stack they do not complain. And even with patient insects I repeat a stack with new settings. Memory is cheap, and a compete stack can be deleted in a second. 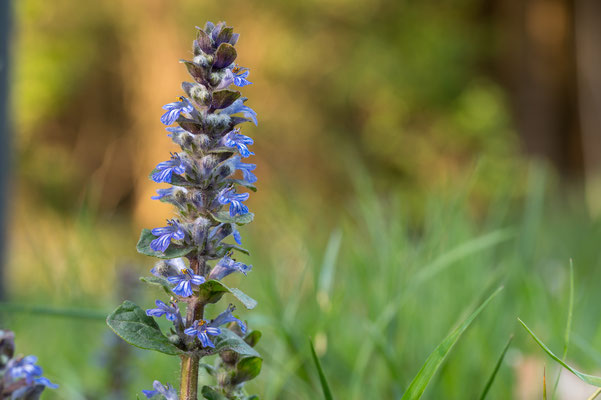 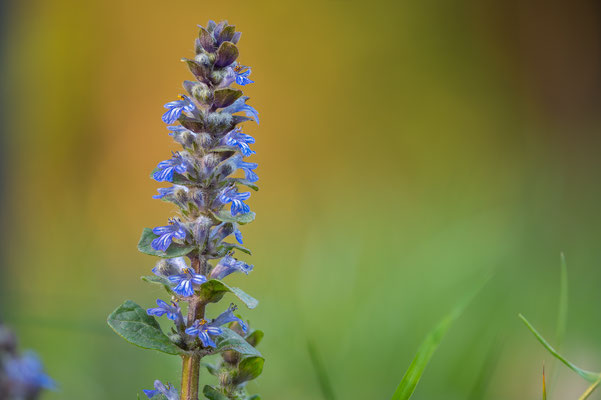 Of course it makes sense only to change one setting between different stacks. Otherwise it might become cumbersome to see the effect of each setting. Still it is important to keep in mind the impact of changing one parameter on all others. Keeping the ISO constant, and changing the aperture, means I have to change the exposure time, too.